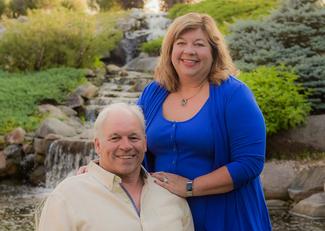 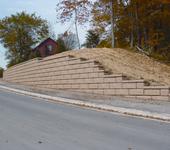 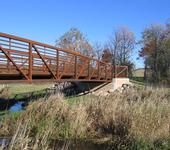 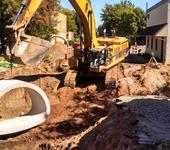 Established in the spring of 1981, Steve and Jeanette Hentges started out with just a backhoe and a crane. “We were working and bidding out of the basement of our house,” recalled Jeanette Hentges about the early years of S.M. Hentges & Sons.

Both entered the business with valuable work experience, as well as a strong work ethic from their farm backgrounds. Jeanette studied accounting in vocational school and worked at Toro Manufacturing Company, gaining office experience. Steve, whose father died when Steve was only 16, worked on his neighbor’s farm and started his own snow plowing business in high school. After high school he gained on-the-job training by working for utility companies. When they got married in 1978 Steve started a towing business and Jeanette was working for Toro.

They entered the construction business when a strike shut down a large building project near Shakopee, Minn. Having worked for the company, Howe Fertilizer Company, hauling fertilizer as a side job, Steve asked if he could handle the site excavation, concrete and erection work. Soon, they sold the towing company and concentrated on excavation and utility construction.

Living on Jeanette’s income from Toro, they reinvested everything into the company, buying used equipment and repairing it. By 1985 they had three children and Jeanette resigned from Toro to focus on the growing company, which was still based in their house.

Initially taking on mostly sewer and water projects, the company gradually expanded. By 1994 it had grown to six sewer crews, a street crew and a commercial crew for digging footings and the company moved from the

Hentges home to a new office and shop building. In 1997 a concrete division was added.

Expansion has given the company the opportunity to do increasingly large projects. One

of the biggest, the Elm Creek interceptors, was completed in 2001 in Maple Grove, Minn.

diameter at an average depth of 50 feet.

At about the same time, the company placed another 55,000 feet of sewer pipe for an

Working with Jeanette in their family business has worked well, says Steve. He handles the operations in the field and his wife is in charge of the finances. “I buy it; she has to figure out how to pay for it!” he said, laughing.

A big key to success, he says, is simply the motivation to get the job done – to finish what he starts and do a good job.

Steve’s secret to success also appears to be “lots of hours and hard work.” During the peak production months his day starts at 3:30 or 4 a.m. for a few hours at the office, followed by another 12-13 hours at job sites – whatever it takes to get the job done. 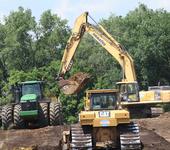